Who is Tom Marsh?

Chester First Selectman Tom Marsh is running for governor as a member of the Independent Party. Who is he?

As first selectman, he saved American taxpayers $600,000, stopped polluting Chester Creek and set the 2010 town budget lower than the 2005 budget he inherited.

Watch the video to find out more. 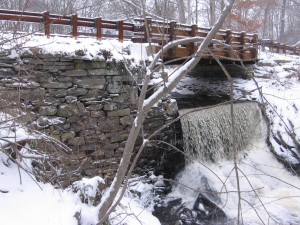 Narrator: You might not have heard, but Tom Marsh is running for governor.  Hi, this is Zachary Janowski for Raising Hale. Today we’re going to talk to Tom Marsh, first selectman for the town of Chester, and why he’s running for Governor.

Tom Marsh: Well, I’m Tom Marsh. I’m currently the first selectmen of Chester. I was re-elected to my third term this past November.

Tom Marsh: We had a bridge in town that had been closed for, I believe, it had been three years.

Michael Sanders: In order to get federal funding, the state had to impose very strict requirements on what the bridge had to look like and how it had to be built.

Tom Marsh: My predecessor – and I don’t fault him for this – went out and acquired state grants and federal money to rebuild this bridge. But it was a small country bridge. And in order to meet the mandates that came along with the money, the scope of the project far exceeded the need of the bridge. It was bigger – didn’t really fit in to its location.

Tom Marsh: And we built it, and we foot the bill for it. But it was $271,000. So we built a $900,000 bridge for $270,000. We paid for it our self, but we saved the state or federal government –however you want to look at it—six-hundred grand and we have a perfectly functioning bridge that really fits in with the surroundings.  It’s a wood structure, and it’s over a small stream. It really fits in.

Tom Marsh: We had a sewer system – a small, basically septic system for our village that had been failed for 17 years and the DEP was saying you have the remedy this. Again, my predecessor – and hindsight is always 20/20 so I’ll give him the benefit that he was fighting the battle going along. But he had designed a very large solution that was, for our – doesn’t seem [inaudible] in the whole scope of numbers, but it was about $4 to $5 million dollars for this solution. So we just took what was currently on the system, that was failed, and connected it to the Deep River system. Instead of it being $4.5 to $5 million dollars, the total project cost was $2.5 million dollars. So it solved the problem, we’re out of the consent order, we are no longer polluting the Chester Creek, we did it for half the price, and everybodys happy. So, again, looking more at the scope of the problem instead of what is the money driving us to do.

Narrator: In addition to tacklinginfrastructure problems in Chester, Tom Marsh also dealt with the budget.

Tom Marsh: And the budget that I proposed in 2006, the total budget was about 3 percent less than the budget that had failed a couple of times in 2005. So, there wasn’t any magic tool. We didn’t cut any services. We just started looking at budgeting properly, and in putting the resources aside for what is really needed for the town.

Narrator: Michael Sanders explains other changes that have occurred under Tom Marsh’s leadership.

Michael Sanders: During his tenure, I think we have seen a change in the way the budgets are developed. There is a lot of public engagement in the budget process. There are a lot of new people involved on the volunteer commissions and elected commissions and we’ve had some interesting things just in the last years. For example, we now have a summer market that operates right on Main Street on Sunday mornings. [inaudible] There was a long negotiation among the organizers about where the market should be. It was decided to put it right on Main Street. But then negotiations about whether we close Main Street or keep it open – working with the fire department, public safety people… And eventually came up with a solution that pretty much everybody is happy with. Most of the merchants are very happy. There [are] a lot of visitors. A lot of people in town that really make the market a part of their weekend. So everything from the real bureaucratic financial changes and the budgeting process to implementing projects with a more local spin and really getting engaged in negotiating with people and talking with people and collaborating at a much higher level. And we do have a – it’s a very open discussion, not everybody is going to say that they feel that they have a role, but I think it’s a much more open discussion then it was in the past.

Tom Marsh: It wasn’t always being the cheapest. It was providing the best value. And it was that mentality that I brought to municipal government – provide value to the customers, and no one likes to pay taxes –but they’re going to be more willing to accept their burden if they feel that they are getting a good value for it. And I think that has to be at the state level as well. Seventy percent of the state is made up of small communities like Chester. We have a certain demographic, a certain set of issues, and the understanding of those issues needs to be brought to the statewide debate.

DIFFERANCE AND CHANGE, IS WHAT TOM MARSH IS ALL ABOUT! He thinks for himself and by himself, for the better interest of each and every tax payer, always!!! He wants to bring about a State Government, that is fair, just and conformed with our interest at hand… A Governor, that will be put in by the people and be there for, will be for the people! He does, as says, and keeps his promises. We will not, have to worry about, some-one whom just talk a good talk, but with Tom Marsh, we can count on some-one that also, follows through with what he talks about, engages in the process and does for it, for it is the right thing to do!!!! ACTIONS MEANS MORE THEN WORDS, AND THIS HERE MAN, IS ABOUT PUTTING ACTION INTO MOTION!!! LISA LESSARD